Gene Kelly had a strong Irish temper and a fierce competitive spirit.  From his early days playing high school sports in the 1920s, through his many movies of the 1940s and 50s, to his guest appearances on TV shows in the 1960s, he wanted and needed to control everything and be the best at whatever he did. He found from an early age that unless you are a craftsman and a professional, you shouldn't be in the business.  He demanded and got 100 percent from his loyal team.  He would choose wisely building a group of professionals who were as devoted to producing a superior product as their boss.

Was Gene Kelly a micro manager?  The short answer is yes.  The longer answer is that he was, but he knew when and where to delegate, especially if it was something he did not want to do.  He used Stanley Donen, Jeannie Coyne and Carol Haney to help him work through new dance numbers as well as train anyone who would dance with him.  Stanley was enlisted to teach a young girl, Sharon McManus, a dance that she would have to perform with Gene in the movie, Anchors Aweigh.  The little girl just could not get a jump roping routine.  Gene would come in to the rehearsal room every few hours to check on her progress and Stanley had the look of disgust on his face.  Gene said, "How's it going?"  Stanley would just scowl and would later say that he loathed the little girl, but being a trooper, he taught her the dance.  Gene, of course, played the pied piper and children always loved him.  She hated Stanley and loved Gene.

The Spanish Dance number was wonderful in the movie as can be seen in this clip, but the back story makes it that much sweeter to watch.  Being in control means also to control a great team. 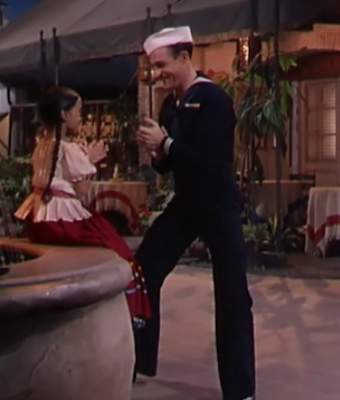 Click the link below
Gene Kelly in Anchors Aweigh