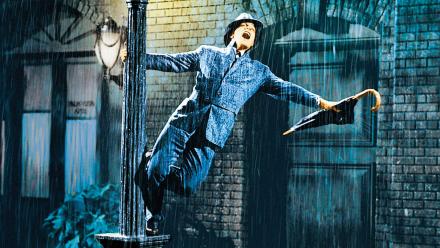 Enlarge image
Credit Image provided courtesy of the Colorado Symphony Orchestra
An iconic image from 'Singin' in the Rain.'
Hollywood history would be very different had Gene Kelly pursued his dream of playing shortstop for the Pittsburg Pirates. Born and raised in the Steel City, it was his mother who insisted he take dance lessons as a child.
Now, Colorado native Patricia Ward Kelly is sharing these and other lesser-known details of about her legendary late husband.
“He’s gone, but the process is very alive,” said Ward Kelly, during an interview at Rocky Mountain PBS. “The number of young people I meet each day who are touched by him is phenomenal. It gives me a great sense that he’s continuing to inspire young people.” 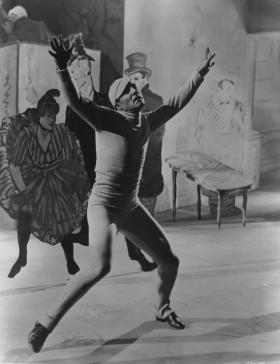 Enlarge image
Credit Courtesy Patricia Ward Kelly
Gene Kelly in one of his many movie musical roles.
Just imagine if Kelly opted for baseball instead of Broadway:Singin’ in the Rain, one of the most popular movie musicals of all time, might never have been. Instead of a delirious-with-love Don Lockwoodtapping and twirling through a torrential downpour, there would be spry saves at shortstop
Exclamations of ‘Grounder Nabbed’ may have replaced ‘Gotta’ Dance.’
The sports star did not immerge but the athletic impulse Kelly had as a kid would define his dance style - be it on the Great White Way, in Tinsel Town, or on television.
If that wasn’t enough, Kelly also spoke French, read Latin and wrote poetry.
“He felt that you needed this broad grounding in all subjects in order to be a great dancer,” said Ward Kelly.
A "triple threat” in the performing arts world is someone who can dance, sing, and act equally well. (It’s a relatively uncommon distinction among performers.) Kelly was at least a quintuple threat who, in addition to acting, singing, and dancing, also choreographed, and directed.
His approach to dance on film – showing long, uncut sequences and the entire body from head-to-toe, also helped revolutionize the American movie musical.
The behind-the-scenes details Kelly related to his biographer wife are now fueling efforts like Ward Kelly’s forthcoming memoir and a live performance piece entitled Gene Kelly: The Legacy.
Ward Kelly personally presented Gene Kelly: The Legacy as part of the2013 Starz International Film Festival. It was an evening that included film clips, personal reflections about their time together as a couple, as well as stories Kelly related to her about how and why he wanted to capture dance on film.
"Gene, coming out of the depression said…, ‘I want to dance like people, like my father’s people, and people that did not have money,' " said Ward Kelly. "He wanted to create something - like Gershwin - create a particularly American style."
Part of that style included showing the lines of the body. Brandishing one of Kelly’s t-shirts with jagged, uneven edges, she showed how he cut it with scissors and then tucked the smaller garment into his pants.
“The beauty of the line of the dance was not in having a bulky suit or things stuffed into your pants so this was his way to have a leaner line,” Ward Kelly explained.
Kelly’s musical numbers - such as the 13 minute "Broadway Melody" ballet in Singin’ in the Rain - were at times epic. They could also be intimate. Such as the avant-garde duets he performed with a newspaper in a barn, an animated mouse, or puddles of rain water.
“I think a lot of that was the innovation too of coming up with new ways to create movement and sound and dance out of simple things like a torn newspaper and a squeaky board,” said Ward Kelly. “I think anything to bring it down to the level of the everyday man and make it real, so he’s not in some fanciful thing often he’s just right on the street literally.”
A Chance Encounter
When Gene Kelly met Patricia Ward in 1985 there was one project and a 46 year age difference between them. That one project would spark their eventual marriage and her documenting the legendary Broadway, movie musical, and television icon.
They met in Washington, D.C. while working on a television project for the Smithsonian as a script writer and the host/narrator respectively. Following that project, he hired her.
“He brought me out to California to write his story,” said Ward Kelly. That was in the mid- 1980s. They married in 1990 and she never left.
For more than a decade she documented everything Kelly said. There were audio recordings and copious notes. At times the scribe sessions were so impromptu sugar packets and cocktail napkins sufficed for archival tools.
Ward Kelly can’t count herself among the young people inspired by him. When she first met Kelly, she didn't know he was famous.

Enlarge image
We really bonded on a different level. On a level of poetry and word origins and things that I don’t think he’d encountered that often and I certainly hadn’t encountered anyone quite like him before either,” said Ward Kelly.
The Colorado Symphony Orchestra will screen Singin’ in the Rain with live orchestral accompaniment Jan. 11, 2014.
Posted by Unknown at 3:51 AM