A Century of Charlie Chaplin 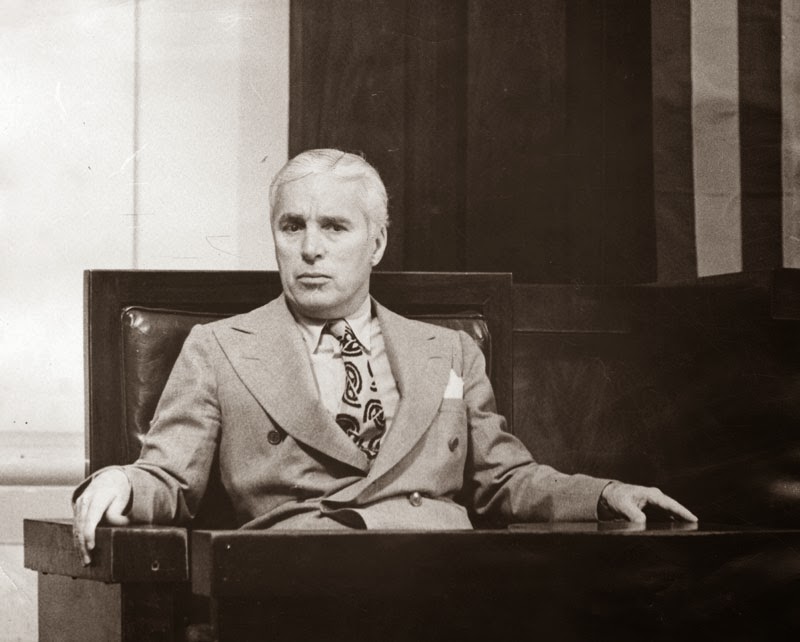 His darkest moment and what began the rapid downfall of his popularity.  Chaplin on trial  in the early 40s.  A paternity suit by a lunatic actress, Joan Barry, and a trumped up false accusation on violating the Mann Act destroyed Chaplin's image in the press and for much of the public.  He beat both charges with proof of his innocence, but his ground breaking movie in which he starred, not as the Tramp, but as a serial murderer of woman was the last straw for the public.  His genius was still intact and his legacy, but much of the nation was against him with protests and the Red Scare.  By 1952, when he went to London to premiere his brilliant movie, Limelight, J. Edgar Hoover had his reentry visa revoked and Chaplin was exiled for 20 years, living a peaceful life in Vevey, Switzerland.  Finally, in 1972, Hollywood brought him back for an honorary Oscar and Chaplin was again on top.

Remember him for his genius, his humor and his contribution to laughter and as one of the pioneers of movie making along with Mary Pickford, Douglas Fairbanks and D.W. Griffith.

The Tramp was his creation and made him the most famous man on earth for a time. 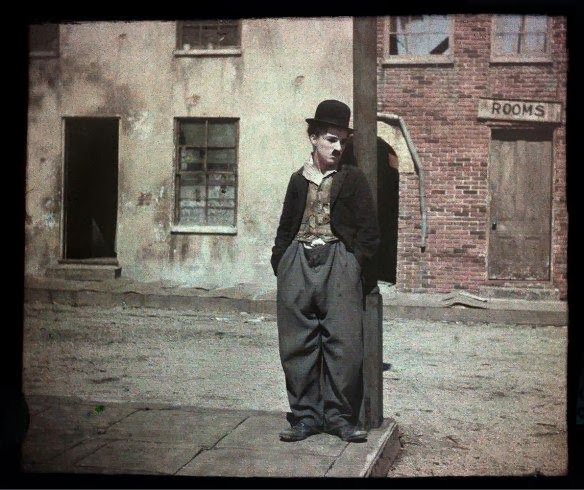 "Soldiers!!! Don't give yourselves to these brutes - men who despise you - enslave you - who regiment your lives - tell you what to do - what to think and what to feel! Who drill you - diet you - treat you like cattle and use you as cannon fodder! Don't give yourselves to these unnatural men - machine men with machine minds and machine hearts! You are not machines! You are not cattle! You are men! With the love of humanity in your hearts! Don't hate! Only the unloved hate - the unloved and the unnatural!" 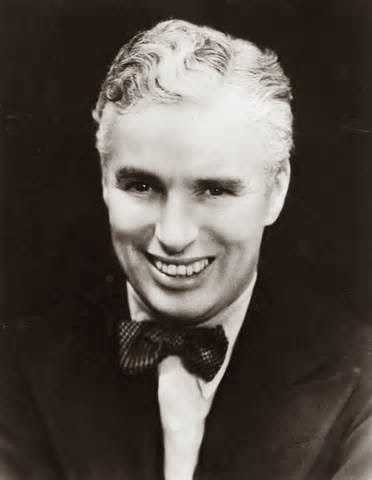 The greatest speech in all recorded human history was made by a little tramp. Go figure.

In January of 1914 - one-hundred years ago this month - an obscure, twenty-four-year-old English music hall comedian named Charles Chaplin walked through the entrance of the Keystone Film Company in Eden, California, a suburb of Los Angeles. He had been offered one-hundred-and-fifty dollars a week by producer Mack Sennett to have a go at the infant movie industry. By year's end he would be one of the most famous men on the planet.

My discovery of Charlie Chaplin can be traced to Christmas Day 1968. At a get-together at the home of a Notre Dame classmate of my father's, a bunch of us kids were getting ice-skating lessons on a small pond that adjoined the house. When it became apparent that I utterly lacked any aptitude for the ice, I wondered inside and spied a small television set on a bookshelf. When I turned it on, by accident or destiny, the channel was set to public television - Channel Thirteen. On the screen a little man was wrecking havoc on a pair of skates - this time of the roller variety. What I was watching was a short from 1916 called "The Rink". That was all I needed to see, I've been hooked ever since.

There wasn't much substance to film comedy prior to the moment Charlie Chaplin entered the international consciousness one-hundred years ago. He proved that it could be viewed as great art - something to be taken seriously by audiences and critics alike. By 1917 he (and his Little Tramp) had evolved from the fast-paced, knockabout mayhem of his early Keystone films, to a more subtle and sympathetic character. The tramp by this time was funnier than he had ever been, but there was a passion and soul that had not revealed itself in his earliest films. Each of the twelve films he made for the Mutual Film Corporation in the years 1916-1917 are the cinematic equivalent of precious gems; twelve mini-masterpieces.

Toward the end of the silent era, while the quantity declined, the quality of his films was nearly universally agreed upon. All these decades later serious film critics are still in agreement. Chaplin was an artist. One of the greatest of the twentieth century.

The political persecution of Charles Chaplin began in 1940 when he released the bravest film ever made. "The Great Dictator" depicted the story of two very different people (both played by Chaplin) who could be (but are not) identical twins: A timid little Jewish barber and Adenoid Hinkle, the dictator of a fictional country called Ptomainia. The film was a satirical attack on Adolf Hitler and the Nazi regime. Toward the movie's end, the two men are mistaken for one another and the little barber is taken to speak at a massive rally that the dictator had called for on the eve of the invasion of an entire continent. The speech he gives, which is really Chaplin's plea to the world for peace and understanding, still resonates across the decades:

"Let us fight for a new world - a decent world that will give men a chance to work - that will give youth a future and old age a security. By the promise of these things, brutes have risen to power. But they lie! They do not fulfill that promise. They never will! Dictators free themselves but they enslave the people."

This was Communistic stuff - at least according to the jackasses on the House Un-American Activities Committee (HUAC). The official forces of darkness went after Charlie in a way that reminds one of the persecution of another comedian, Lenny Bruce, a generation later. Chaplin's FBI file is encyclopedic. Although Al Capone was never a priority for J. Edgar Hoover, Charlie Chaplin was somehow seen as a threat to the peace and security of the free world. Although he was not a Communist, his views on matters social, economic and racial weredecidedly left-of-center. In other words, this was a man decades ahead of his time.

No part of his private life was off-limits. When a blood test ordered for a paternity suit proved that he could not be the father of the child he was accused of siring, he was ordered to pay for her maintenance until she reached adulthood nonetheless. On another occasion he was prosecuted for a violation of the "Mann Act". His crime was the fact that he took a grown woman across state lines for the purpose of sex. As Walter Matthau said of the incident many years later, "It was that kind of time in America."

His 1947 film, Monsieur Verdoux, only added to his problems. Henri Verdoux is a former employee of a bank whose job has been eliminated by a faceless bureaucracy. In order to care for his crippled wife and son, he goes into the "business". of marrying rich widows and murdering them for their money. At the film's conclusion, Verdoux is to be executed for murder. As he offers his final words, Chaplin the humanist emerges from behind the mask of Henri Verdoux:

"However remiss the prosecutor has been in complimenting me, he at least admits that I have brains.Thank you, Monsieur, I have; and for thirty-five years I used them honestly. After that, nobody wanted them. So I was forced to go into business for myself. As for being a mass-killer? Does not the world encourage it? Is it not building weapons of destruction for the sole purpose of mass killing? Has it not blown unsuspecting women and little children to pieces? And done it very scientifically! Ha! As a mass-killer, I'm an amateur by comparison."

I'll say it again: Charlie Chaplin was one of the bravest men who ever lived.

In September of 1952 he sailed with his family to England for the premiere of his film, "Limelight". While on board the ship he was informed by wire that he would not be allowed back into the Unites States. Said one nitwit on HUAC, he had yet to prove his "moral worth". Charlie Chaplin became an exile.

Twenty years later, in April of 1972, Chaplin was invited back to the states to receive a Lifetime Achievement Oscar. Before traveling to Hollywood for the reward ceremonies, there was a gala celebration for him at Lincoln Center in New York City. My brother Pete and I were there for it. We saw Charles Spencer Chaplin in the flesh - and up close - making eye contact with him and even getting a kiss blown at us for good measure. Forty-two years later and that night is as clear as yesterday. It was one of those mountaintop moments that doesn't go away very easily, you know? "Moral worth" indeed.

In addition to being the centennial of his screen debut, April 16 of this year will also mark the one-hundred and twenty-fifth anniversary of his birth. The legacy he leaves us should be treasured and celebrated. We're indeed lucky that he came our way. He's not coming back.

My Autobiography
by Charles Chaplin

The best show business memoirs ever written. Future scholarship on the man's life would reveal that this book was very accurate and not as self-serving as most autobiographies. A great read - in fact I just might read it again now.

The final scene from The Great Dictator (1940)
`
http://www.youtube.com/watch?v=6FMNFvKEy4c

In my opinion, the greatest speech of all time. Charles Spencer Chaplin on the mountaintop - at the conclusion of The Great Dictator. 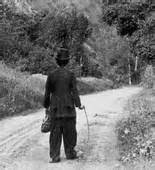