Looking over the Siskel Film Center schedule recently, a little-known film from 1944 called "Christmas Holiday" starring Gene Kelly caught my eye. Hang on. Hang on! Gene Kelly made a Christmas movie? How have I missed this?
"It's one of the oddest movies to come out of Hollywood during World War II," said film scholar Alan K. Rode of Universal's film noir adaptation of the 1939 Somerset Maugham novel, also called "Christmas Holiday." Despite the title, the story has almost nothing to with Christmas.

"I showed this movie last year at my festival in Palm Springs," Rode told me, "and I had Gene Kelly's widow come out and talk. Her life has been dedicated to keeping his legacy alive as a pioneer of dance and film. She's really sharp. And she had to laugh during portions of the movie. She said her husband hated it. He thought it was weird, and he didn't like his part." 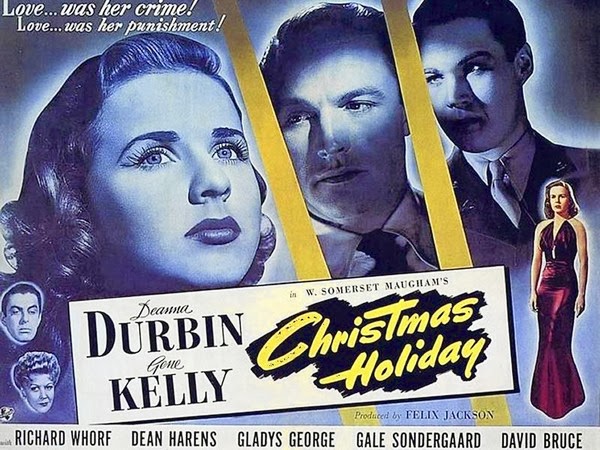 The role is as un-Gene Kellyish as they come. He plays a New Orleans charmer with a gambling problem and anger control issues. Even after he seduces a naive young gal and marries her, his trajectory is filled with considerable nastiness. The guy is a louse. And a phony. And he lives with his mother.
It's not a performance that shows Kelly at his best. He looks uncomfortable in bad-guy mode.
"He is," said Rode. "He's miscast. He was borrowed from MGM (where he was under contract) and he really resented not having control over himself in this old studio era when you were treated like property."
But if you're getting Gene Kelly, why stick him in this type of movie?
"In that era," Rode said, "stars were box office. People went to movies in huge numbers during World War II, and they went based on who was in them. Gene Kelly was an up-and-coming guy at this point. Deanna Durbin was the much bigger star of the two."
Durbin, who plays Kelly's wife, humiliated and forced into prostitution, was actually a huge star at the time. Both a singer and an actress, she came up through the ranks at the same time as Judy Garland, and there was reportedly something of a rivalry there (at least on Garland's part). Durbin was known for her musical comedies and romances (including "Three Smart Girls," a precursor to "The Parent Trap") and her movies made huge sums for Universal — movies that all but kept the studio afloat.
In 1938 both Durbin and Mickey Rooney received an Academy Juvenile Award, an honorary Oscar given to performers under 18 (a practice since phased out). A decade later she was among the highest paid female stars in Hollywood.
Here's a measure of her wattage: According to her obituary in Variety (she died this past April at age 91), her picture was among others that Anne Frank hung in the attic where she and her family hid from the Nazis.
By 1947, thought, Durbin chucked it all, married her third husband and moved to France. She was just 26 when she abandoned her career in movies.
That might have been because the transition from child star to adult roles proved somewhat awkward. She had long been the girl-next-door and "Christmas Holiday" was a stab at shaking her old image.

The movie is bizarre, but bits and pieces stand out. When Kelly brings Durbin to a scrubby drinking hole, she notes that the air is thick with smoke. "It's a law," Kelly tells her. "Don't ask me why, but it's a law."
There's another gem of a moment, when the madam of a brothel, dressed in a gorgeous, slinky sequined dress, offers an appraisal of Durbin: "I like that kid. I like that one-man look in her eyes. I only wish it was a different kind of guy." Richard Whorf, who became good friends with Kelly during filming, plays a jaded, drunken newsman who gives the movie some needed snap. But otherwise, the thing is bonkers.
Here's Rode's assessment: "The movie is so weird because it took one of the greatest musical actresses, who really saved Universal Studios, and cast her as prostitute singing in a road house. And then it took Gene Kelly and turned him into this duplicitous murderer who had an unhealthy, probably incestuous relationship with his mother. How weird is that?"
The film's producer first tried to get things rolling shortly after the book was published. But per Rode: "The Production Code Authority, which was Hollywood's censor, basically said there's no way you can make this book into a movie with all its overtones of murder, prostitution and incest, so forget it.
"Universal took another crack at it a few years later, and by this time Durbin was Universal's meal ticket. So if she said she wanted be in this kind of perverse story, they were willing to indulge her. Because anything she was in would do well at the box office."
It turned out to be her most successful movie, making more than $2 million — more than any of her previous films.
The thing is, it's not a great movie.
"No, it isn't," Rode said. "But it's an interesting movie. As a film historian watching this I was wondering, who greenlighted this? It is so un-Hollywood. Particularly for 1944, right in the middle of World War II when Hollywood was producing so many movies that were distractions — the sword-and-sandal stuff, the horror movies, the patriotic war-themed films.
Rode said screenwriter Herman J. Mankiewicz (who co-wrote "Citizen Kane" and "The Wizard of Oz") deserves much of the credit for the strangeness of the film.

"Mankiewicz was an outrageously talented, outrageous character who eventually drank himself out of Hollywood. It's a fascinating screenplay. And maybe it's only a screenplay that someone who is an alcoholic and kind of crazy can come up with. I think a lot of the weirdness of the movie is reflected by Herman Mankiewicz."
And what of that deceptively seasonal title? "It was released in May," said Rode. "No one had enough gumption to release this in December as a Christmas movie. It's not a feel-good movie at all."
"Christmas Holiday" screens 5 p.m. Saturday and 6 p.m. Monday at the Siskel Film Center. Go to siskelfilmcenter.org/christmas-holiday.
Posted by Unknown at 1:33 AM