Stanley Donen and Gene Kelly worked together as partners on movies from 1945 to 1955 at MGM. Stanley had been a member of the Pal Joey cast on Broadway in 1940 as a 16 year old boy.  He later came to Hollywood and started apprenticing for Gene.  They made many movies together with Gene in front of the camera and Stanley behind it.  They even co-directed three films.  Stanley was a major part of Gene's success.

After their last film together, It's Always Fair Weather, in 1955, they never worked together again.  Stanley had already been on his own directing other movies and wanted to get out from behind Gene's shadow. Gene got all the credit and screen time when they were together and Stanley simply grew up and became resentful of Gene.  I don't blame Stanley at all.  It was his time to shine.  He, eventually, outshone Gene in the directors seat and had a brilliant career behind the camera working with Cary Grant, Fred Astaire and Audrey Hepburn in many movies.

He and Gene never worked together and rarely spoke or saw each other again until 1991, five years before Gene's death.

Donen, on Kelly in a 1992 interview talking about the split after It's Always Fair Weather: "I thought about quitting, and I almost did. Co-directing is a nightmare. Co-anything is a nightmare.... It's especially unpleasant and very difficult. To work with somebody particularly somebody who is so concerned with his image, was impossible." "I'm grateful to him, but I paid him back the debt, ten times over. And he got his money's worth out of me." Not only did Donen never work with Kelly again, but he never worked with Arthur Freed, MGM or Comden and Green. 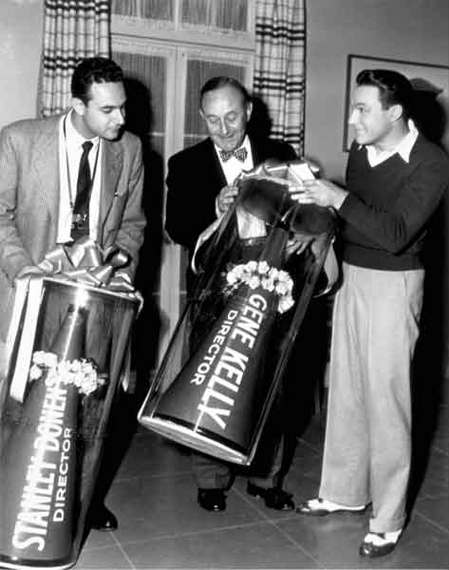 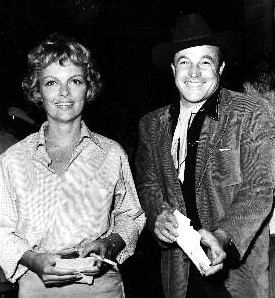 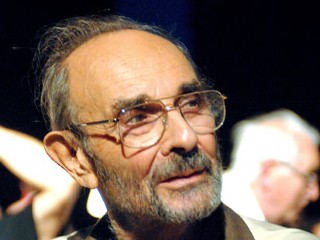 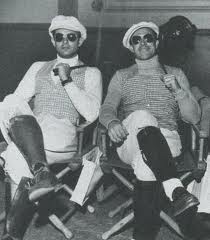 Stanley and Gene playing around as directors from the silent era. 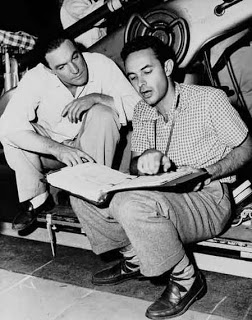 Stanley and Gene conferring on the set.
The only time he broke bread with Kelly again, was at a dinner after a Comden and Green tribute when they all went to Spagos in Hollywood. Kelly had paid tribute to Stanley during the tribute and invited he and his wife to dinner. Donen seemed upset at a joke Kelly told at dinner. This was not a reconciliation, but a polite get together.

So sad that this great team split on bad terms.
Posted by Unknown at 1:07 PM