Kid Auto Races at Venice, Cal. was Charlie Chaplin’s second motion picture release, and the first to feature his Little Tramp persona.  It was filmed at the Junior Vanderbilt Cup Race held in Venice, California on Saturday, January 10, 1914, and at the children’s pushmobile race held there the following day.  The weekend shoot capped Chaplin’s first week on the job at Mack Sennett’s Keystone Studio, where Chaplin began work following the holidays on Monday, January 5.  (Note: apparently Chaplin commenced shooting Mabel’s Strange Predicament (1914), in which he wears the tramp costume for the first time, immediately prior to the weekend filming of Kid Auto, butMabel was not finished and released until after Kid Auto was released.)
In my book Silent Traces I explain how Chaplin filmed most of the scenes from Kid Auto at the corner of Second (now Main Street) and Westminster in Venice, while looking either north, south, or west, and how several background homes and buildings there are still standing.  I have posted a few photos here.

Main and Westminster, looking west towards the ocean, at what was a hillside country club with tennis courts (fences), and what is now the Westminster Dog Park.
Although the film title mentions a “Kid Auto Race,” I was never able to determine what in the world exactly was a Kid Auto Race?  Thankfully, Todd von Hoffmann, associated withwww.VeniceHeritageMuseum.org, and co-author of The Von Hoffmann Bros.’ Big Damn Book of Sheer Manliness, contacted me with the solution, as reported in the May, 1914 issue of Technical World Magazine. 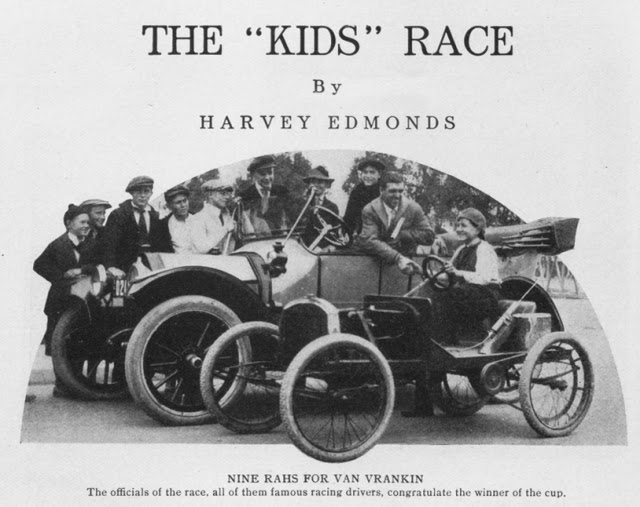 From Technical World Magazine, May 1914
The Kid Auto Race at Venice was, in fact, a sanctioned ten-mile race in which fourteen year old boys piloted home-made one or two-cylinder cars, many adapted from motorcycle engines, while vying for a share of $250 in prize money.  From today’s sue-first, safety-first, bubble-wrap your child perspective, it is almost inconceivable that untrained and unlicensed youths, without helmets, safety equipment, and no doubt without even seat belts, were once actively encouraged to race one another along the streets of Santa Monica and Venice. 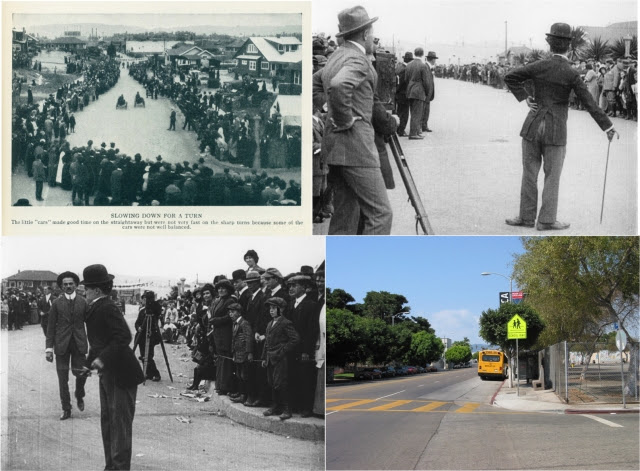 Click to enlarge.  A photo of the Kid Auto Race appearing in Technical World Magazine (upper left), a modern view up Main from Westminster (lower right), and two comparable movie frames.
The article also describes the pushmobile race held the following day, where Chaplin was also filmed, as motorless carts raced down a steep ramp.  Three of the houses pictured in the background below are still standing.  In the far background between Charlie 3 and 4 stands the former Race Thru The Clouds twin-track racing roller coaster, once located along the former Venice Lagoon.

Looking south from Main (at the time Second) and Westminster, at the pushmobile ramp.  Three homes in the back, the far left on San Juan, the other two along Horizon Avenue, still remain (Google Street View links).
I have set forth the complete text of the magazine article below.  While the reporter duly transcribed his narrative of the event, he was either oblivious to, or deliberately chose to ignore, the antics portrayed by Chaplin there at the time.
May, 1914 Technical World Magazine, submitted by Todd von Hoffmann,http://www.VeniceHeritageMuseum.org
Forty youngsters dare-deviled around a ten-mile course at Venice, California some little time ago in the Junior Vanderbilt Cup Race. They all had homemade one- or two-cylinder cars and they were all after one of the six silver cups and a share in two hundred and fifty dollars of prize money.
Albert Van Vrankin, Jr. sailed home with first prize in a little over thirty-seven minutes, although in the middle of the race he ran into a ditch, turned turtle, and had to extricate himself and his car. 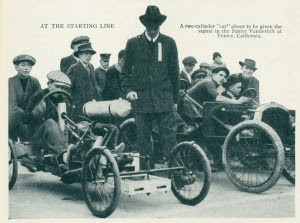 The starting line for the Kid Auto Race at Venice
Most of the machines were ingenious adaptations of motorcycle engines to four-wheel crafts. Many of these cars, some of which are easily controlled, are capable of amazing speed.
At the race, the ten thousand spectators, including Barney Oldfield, Earl Cooper, and Teddy Tetzlaff, who judged the finish, cheered wildly as the contestants whirled around the track.
Regular road racing rules the contest and the fourteen-year-olds traveled the course with splendid judgment and the daring of older heads.
Besides the Junior Vanderbilt, there were races for pushmobiles, which furnished a great deal of amusement for the crowd. A broad incline was used to give the pushcars a good start and most of the boys had trouble in getting to the bottom right side up.  Some of the spills looked dangerous to the crowd but none of the drivers were injured.
The difficulties of the boys in constructing cars for the Vanderbilt are told only by the perfection of the machines, because the adaptation of a motorcycle engine to an automobile is a very difficult mechanical job. The dozens of cycle car manufacturers that have sprung up within the last few months have given testimony freely that the thing can’t be done. A special motor for the little car of the “common people” has been built by most of the manufacturers, and many different schemes of transmission and differential have been used.
Posted by Unknown at 4:36 AM