Chaplin at 100 years in Film 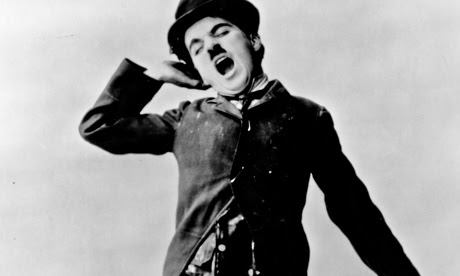 Developed slowly over time … Charlie Chaplin as the Tramp. Photograph: Alamy
A centenary is more than excuse enough for a party, even if the birthday boy is a work of fiction – a beggar, even, with ill-fitting shoes, a violent streak and bow legs. This is the year of the Tramp. Twenty-fourteen marks 100 years since Charlie Chaplin first appeared on a movie screen as an eccentric fellow with a toothbrush moustache and a derby hat, walking with splayed feet and carrying a cane. Due to the global reach of Chaplin's fame, there will be events to mark the anniversary around the world all year, but this weekend, the corks were popped in Bristol. The city's Slapstick festival, itself celebrating a decade on the job, kicked up its heels with a sumptuous gala screening of Chaplin's late silent masterpiece City Lights, and some searching questions about who exactly we were celebrating.
The Tramp arrived, so the story goes, on a quiet day at Keystone studios in January 1914. Studio boss Mack Sennett fretted that the film they were shooting that day, Mabel's Strange Predicament, was lacking a few killer gags, so he sent Chaplin, who had only recently joined the company, to get decked out in a "comedy makeup", return to the set and inject some laughs. According to Chaplin's much-quoted recollection of the day, the idea for the outfit, and the character of the little Tramp, came to him after only a moment's thought: "On the way to the wardrobe I thought I would dress in baggy pants, big shoes, a cane and a derby hat. I wanted everything a contradiction: the pants baggy, the coat tight, the hat small and the shoes large." The moustache was added to age his 24-year-old face without masking his expressions and that, according to Chaplin's autobiography, was that. "The clothes and the makeup made me feel the person he was. I began to know him, and by the time I walked on to the stage he was fully born." 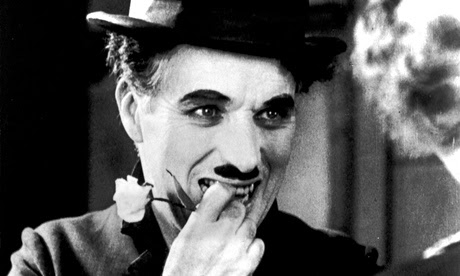 But, as Chaplin biographer David Robinson argued on the weekend, there was no such easy birth. While the mischievous "little fellow" character was an instant hit with audiences, granting his creator an unparalled level of fame, he had a more gradual evolution than that story suggests. The character Chaplin plays in those early Keystone one-reelers is not the Tramp of The Kid or City Lights. He's meaner, tougher and certainly not a rough sleeper. He is very often employed (as a piano mover, a waiter, a property man at a film studio), sometimes with a home, a wife and child. He's a pleasure-seeking anti-authoritarian and a flirt, often prone to sneaking a drink, but not because he doesn't have the money to pay for it. If you want to see Chaplin as a bona fide derelict, says Robinson, you have to wait until his 1915 film, The Tramp. By this time, Chaplin was a global success, he had transferred to the Essanay studio for a toothsome $1,250-a-week salary and recruited Edna Purviance as a leading lady. The Tramp is a smart film that folds pathos neatly into the slapstick, with our hero playing a kind-hearted drifter down on his luck who finds welcome and work at a farm. There is plenty of rowdy fun with pitchforks and ladders, but at the film's bittersweet finish, thinking he has been rejected by Purviance, Chaplin waddles off down a dusty road, at first dejectedly and then with a familiar spring in his step.
The genius of the Tramp's long gestation is that Chaplin created a character who was an everyman before he was identified as an outsider – which is partly how he eventually came to win the audience's sympathy for an unlikely leading man. If you look at American films from around the time of Chaplin's screen debut, tramps are the villains: housebreakers, street muggers and train robbers. It was no mean trick to present a vagrant as a hero, or a lover. And it's no coincidence either that all the while that Chaplin was refining his onscreen identity, his own reputation was under attack. In fact, the Tramp was far more popular than he was. At the outbreak of the first world war, Chaplin was already a massive success, but his fame made him a target. As film historian Kevin Brownlow detailed at the festival, even before the introduction of conscription in 1916 there were calls in the British press for Chaplin to return home from the US and enlist in the British army. Press baron Lord Northcliffe joined the throng of "slacker" accusations and Chaplin was mocked in popular songs and cartoons. "I really thought they were coming to get me," he later said. All the while, Chaplin was using hiscelebrity status to sell Liberty bonds in the States, and transferring large amounts of his substantial income to the British government. Cutouts of the Tramp were propped up by soldiers in British trenches "so the Germans would die laughing" and his movies were projected on the ceilings of military hospitals so wounded soldiers could enoy a morale-raising chuckle from their beds. 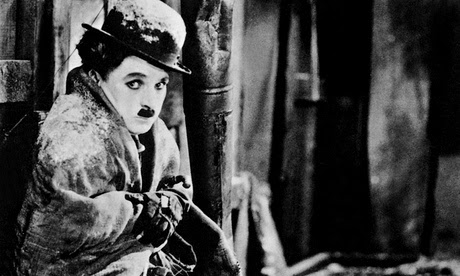 Chaplin had to strike a delicate balance. His main defence against the barrage of white feathers was that his wealth and influence rendered him more valuable to his country in Los Angeles than at the front – which was placing him at a far cry from the underdog he played on screen. No doubt the scandal was part of his motivation for rendering the character more sympathetic, more prone to sweetness than petty theft and violence. It would be an over-simplification to say that Chaplin resolved these tensions at a blow by making his war comedy Shoulder Arms, but the Tramp's appearance in the trenches was certainly well-timed. By the time this 40-minute mini-feature was released, the war was almost over, but the audiences who (literally) tore down cinema doors to see the film, were thrilled to see their beloved Tramp in uniform, and capturing the kaiser too.
While Chaplin's origin story for the Tramp is a beautiful piece of movie myth-making, the truth is inevitably more complex and more interesting – it took much longer for the little fellow to grow into the Tramp, and longer still for the Tramp to become a hero. What's fascinating is that even while the sentimentality swelled, the Tramp never lost his edge. The Slapstick festival afforded the opportunity to watch Chaplin both in City Lights, which took years to make and was finally released in 1931, and in Kid Auto Races, shot in one day in 1914, within a few hours of each other. It's Kid Auto Races that the centenary springs from – filmed just after Mabel's Strange Predicament, it was released two days earlier. Despite their many differences, in each film the story is to do with the Tramp's problematic visibility. In the early short, he plays an impostor who wanders into shot when a cameraman is trying to record a children's race. In the feature film, which was released as the great depression set in, the Tramp is an unwanted presence everywhere – loved only by a blind girl, and a man who is blind drunk. 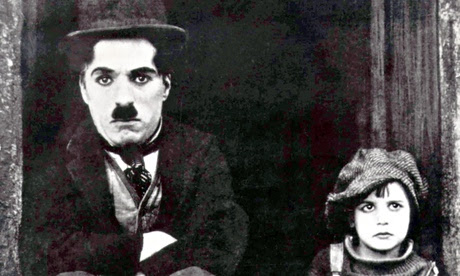 The first film ends with Chaplin gurning grotesquely at the camera, a final confrontation to give the audience a jolt and a giggle. City Lights also ends on a close-up of the Tramp, smiling nervously at the woman he loves, who is seeing him for the first time – a question hovering in the air as to whether she will return his affection now she knows his low-rent identity. This centenary is the perfect to time to return that gaze, and appreciate Chaplin's genius in making cinema audiences fall in love with someone they never expected to.
Posted by Unknown at 5:05 AM