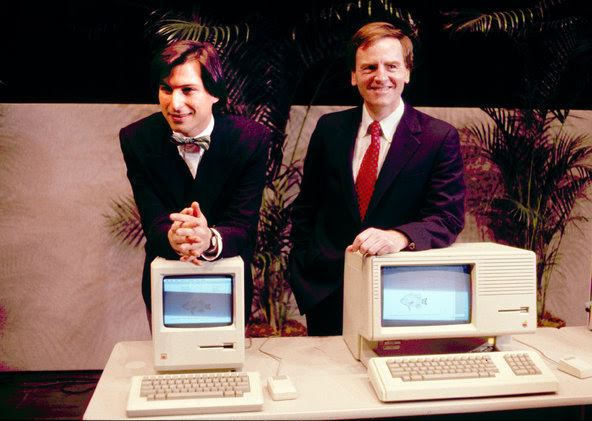 As the vehicle sped away from the white office building, Mr. Levy looked at the driver and said hello to Steven P. Jobs, then the young, spry co-founder of Apple, who immediately responded with a voluble tirade about the magazine Mr. Levy worked for.On a late-November day in 1983, Steven Levy, then a freelance journalist for Rolling Stone, got into a car outside 10460 Bandley Drive, in Cupertino, Calif.
As he zigzagged Cupertino’s streets toward a pizza restaurant, Mr. Jobs complained that a coming article about the Macintosh — a computer that was still two months away from being announced — would not be on the cover of Rolling Stone, but rather stuffed inside a planned issue. Mr. Jobs groused that the magazine was, as Mr. Levy remembers, an expletive, and said a previous cover article about MTV was an expletive, too.
Mr. Levy couldn’t get a word in, but when he finally did, he explained that he had written the MTV cover article Mr. Jobs hated so much.
“He immediately changed the subject,” Mr. Levy recalled with a chuckle in a phone interview.
For the next couple of hours, over pizza with olives, Mr. Levy interviewed Mr. Jobs about the coming Mac computer, his design philosophy, a breakup which had left Mr. Jobs love-sick and, ominously, struggles with Apple’s board over the direction of the company. (Mr. Jobs would be fired two years later.)
The interview was a rare and raw moment for Mr. Jobs, where he bared his true feelings on the record with a reporter. 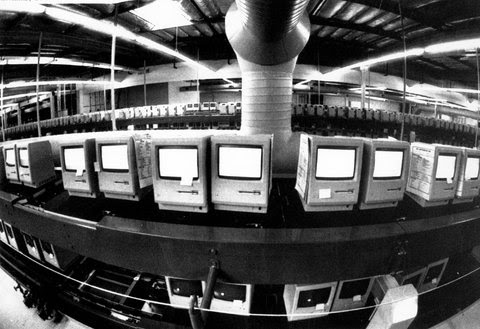 Paul Sakuma/Associated PressMacintosh computers lined up at a production facility in March 1984.
While some snippets of the 11,500-word conversation were used in the Rolling Stone feature (which never did make it to the cover), until now, the transcript has been tucked away in one of Mr. Levy’s files.
To celebrate the 30-year anniversary of the Mac, Mr. Levy said Friday that he was appending the transcript, which is “essentially unexpurgated,” in an updated Kindle version of the book about the birth of the Macintosh, “Insanely Great: The Life and Times of Macintosh, the Computer that Changed Everything.”
It’s clear in the interview that Mr. Jobs was struggling with a few demons. For one, he was upset about a recent article in Time magazine that described himas petulant and unkind. And he blamed his obsession with work for a breakup.
“I just had a romance that I really care about, a lot — I mean, a lot — go up in smoke. Because of the stress, and the sort of other woman that Macintosh is,” Mr. Jobs said.
Yet what is apparent in the discussion is that Mr. Jobs knows he is about to introduce a computer that is going to change the world. He discusses the graphics and the design of the machine with the passion of an artist describing a newly completed masterpiece. “I mean, it’s incredibly great,” Mr. Jobs said when asked about the Mac. “It’s insanely great.”
The Times’s January 1984 Review of the Macintosh: “Apple Weighs In With Macintosh”
The Macintosh he was so excited about would be the world’s first mass-market personal computer that had a graphical user interface and a mouse.
“It’s hard to put yourself in the mindset, to look back at the way things were back then,” Mr. Levy told me when I asked about re-reading the interview after all these years. “Computers had these glowing green letters back then and there was no Internet.”
But Mr. Jobs seemed to know exactly the kind of impact the Mac would have, and the team of people who had helped make it a reality.
He repeatedly refers to the team that built the Mac as “pirates,” and then says a quote that became famous years later: “Better to be a pirate than join the navy.” It’s also clear that Mr. Jobs and his band of over-worked pirates had agonized over every detail of the computer, even analyzing the details of the manual.
There are some aspects of the 30-year-old interview that might answer some unanswerable questions about what Mr. Jobs would have done with his life if he were still alive today.
When Mr. Levy told Mr. Jobs that there was “speculation” that he might go into politics, Mr. Jobs replied that he had no desire to enter the public sector and noted that the private sector could have a greater influence on society. “I’m one of those people that think Thomas Edison and the light bulb changed the world more than Karl Marx ever did,” Mr. Jobs said. 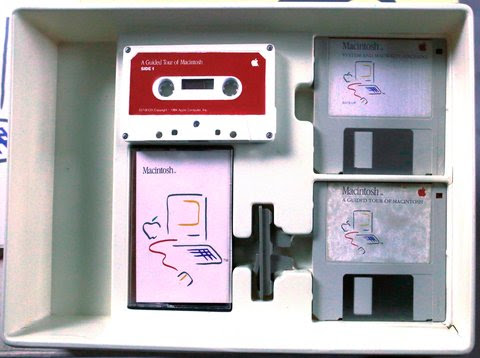 Brian Snyder/ReutersAccessories for an original 128K Macintosh computer included an disk for the operating system, as well as a guided tour of the system.
One thing Mr. Levy was continually searching for in the interview, was what was driving Mr. Jobs — a question that was echoed in 2011 in “Steve Jobs,” the biography written by Walter Isaacson.
In the 1983 interview, it’s clear that money isn’t the answer. Mr. Jobs talked about his net worth falling by $250 million in six months. ”I’ve lost a quarter billion dollars! You know, that’s very character building,” he said, and notes that at some point, counting your millions of dollars is “just stupid.”
Mr. Levy pressed again. “The question I was getting at is, what’s driving you here?”
“Well, it’s like computers and society are out on a first date in this decade, and for some crazy reason we’re just in the right place at the right time to make that romance blossom,” Mr. Jobs replied, noting that the 1980s were the beginning of the computing revolution. “We can make them great, we can make a great product that people can easily use.”
Such passion is something that would follow Mr. Jobs through his career, and what he said next seemed to be the driving force behind that passion.
“I look at myself as an artist if anything,” Mr. Jobs said. “Sort of a trapeze artist.”
“With or without a net?” Mr. Levy asked.
“Without,” Mr. Jobs replied, and then he said one of the more profound things in the interview: ”You know we’re constantly taking. We don’t make most of the food we eat, we don’t grow it, anyway. We wear clothes other people make, we speak a language other people developed, we use a mathematics other people evolved and spent their lives building. I mean we’re constantly taking things. It’s a wonderful ecstatic feeling to create something and put it into the pool of human experience and knowledge.”
Given that we’re still talking about the Mac computer 30 years later, and a long list of other products Mr. Jobs helped create, it’s apparent that he was able to add something to that pool.
Posted by Unknown at 3:53 AM