Rare Chaplin in Color as The Tramp

This is an amazing, virtually never before seen color photo of Charlie Chaplin in his Tramp outfit.  We always think of him in B&W as with all of the other Silent Stars, but for them, life was in striking color as you see here.  We forget that watching the old flickering images on the screen in their stark contrasting blacks, grays and whites. 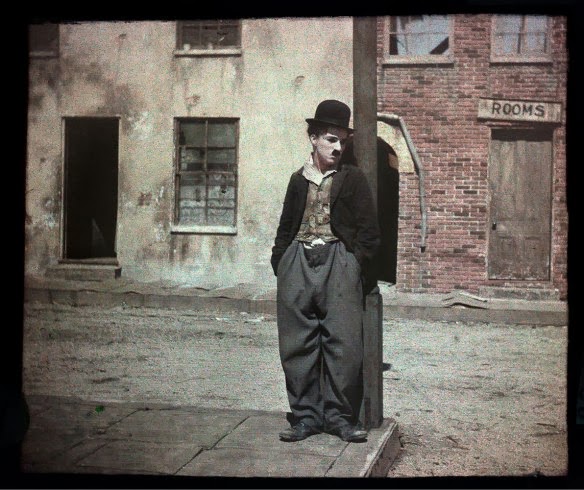 Lillian Gish. Harold Lloyd. The inimitable Buster Keaton. No discussion of silent movies is complete without mention of — and tribute to — those silver-screen pioneers. But no single figure epitomizes that Hollywood era as neatly as Charlie Chaplin’s immortal creation, “the Tramp.” Baggy pants, tight coat, small hat, mustache, that immediately recognizable, floppy-footed gait — these particulars have become so intimately bound up with our collective idea of what silent films look and feel like that, for countless moviegoers all over the world, Chaplin’s Tramp is the silent era.
It’s especially striking, then, to come upon a color photograph of Chaplin, in character, from so early in his career. The autochrome above, made around 1918, somehow heightens much of the Tramp’s already considerable appeal. Instead of the black-and-white icon of pluck and pathos we thought we knew, we meet a creature of flesh and blood. The pinkish tone of the cheek; the myriad colors evident in the vest; the shadows playing on Chaplin’s brow and neck — all of these details sharpen our interest in Chaplin the man, just as his films spark admiration for Chaplin the artist.
[See more autochromes in a recent LightBox post about color photos from World War I.]
Here, 100 years after Chaplin’s Feb. 2, 1914, screen debut (in a 13-minute one-reeler, Making a Living), LightBox shares this surprising, quiet Charles Zoller portrait of the London-born actor, writer and director. Zoller (1856-1934) was a furniture dealer from Rochester, N.Y., who was introduced to the tricky — but hugely rewarding — autochrome process in Paris in 1907, the very year that the Lumiere brothers first marketed the new picture-making technology. In fact, Zoller — whose archive is housed at the Eastman House — might well have been the first amateur American photographer to work with autochromes.
His Chaplin portrait, meanwhile, still transfixes us a full century after it was made. Standing in that quintessential pose, Chaplin might be mulling one of his trademark stunts, or reconsidering the sequence of a critical scene. But what really moves us is not the mystery of what’s on his mind, but the sense that we’re actually there with him, in the California sun, moments before someone (perhaps Chaplin himself) shouts that stirring, cinematic word: Action!